John A. Burnham, who was a member of the 33rd Illinois from Normal, provides an interesting account of the Battle of Bayou Cache, also known as “Cotton Plant.” As most of you know, I have written extensively on this battle in both my book, and an article that I have submitted to the Arkansas Historical Quarterly. This particular account popped up just recently on google books.

If you wish to see the background info on the fight, please refer to the above links:

The Normal regiment found itself at Pilot Knob, Mo., September 20, 1861. Here and near here its officers and soldiers were taught many of the important first lessons in soldiery and military tactics.

Although the Normal contingent formed the nucleus of the 33rd regiment, yet it contained more than nine hundred other members who sometimes felt the Normalites were a little too much inclined to over-rate themselves, and considerable jealousy was early aroused, disappearing, however, as soon as
it was seen that we were always ready to prove by acts and not by words that we were in the war for the good of the cause, and not to promote our own selfish interests. It was not long before we were proud of our comrades, and our comrades were proud to be associated with those who had originated the idea of the schoolmaster’s regiment.

Its first baptism of fire was at Fredericktown, Mo., October 21, 1861, just enough like war to give us a slight zest for more, not a man killed, not a drop of the Regiment’s blood spilled, and the victory was important.

In camp at Ironton, Mo., during the winter of 1861 and 1862, our regiment suffered from sickness but gradually improved itself in military drill, and perfected itself in hard marching during the following spring and summer.
Colonel Hovey won his promotion on this march, which is the main reason for the insertion of a brief account of the battle of Bayou Cache, July 7, 1862. 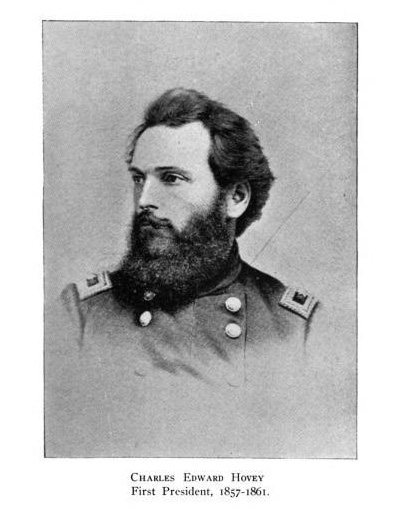 Our regiment formed a part of the advance guard of General Curtis’ army of 15,000 men, marching thru Missouri and Arkansas on the way to Little Rock. The Rebels, for several days, obstructed our march by felling trees in the roads and in other ways, without giving us fight. On the morning of July 7, four companies of the 33rd regiment, with as many more from the 11th Wisconsin regiment, were reconnoitering in advance, removing the blockades, when we fell into an ambush of Texan rangers.

We were driven back at first with severe loss, although not until Company A in charge of a smallcannon belonging to an Indiana battery had resisted a savage attempt to capture the gun. First Sergeant Edward M. Pike, a Normal student now living at Chenoa, Ill., aided by one other man, coupled the cannon by main strength to its foremost wheels, barely saving it from capture, just as the rebels were on the point of reaching for the artillery horses’ bridles. He received a bullet through his cap and for his muscular activity, daring and bravery, was a few years ago given, by the Secretary of War, a medal of honor, which is the only medal granted to a member of the 33rd regiment, to my knowledge. Captain Potter, in command of our company, was severely wounded, with several others. Just as we started to the rear he gave me the command of the company and told me to take it back to the rear. As a matter of fact the company or something else was taking me rapidly back to the rear without orders, and I shall never forget my satisfaction at being under orders to do what was so remarkably agreeable as was that retreat, and feeling that of all that rushing throng pushing our way to the rear amidst the crashing bullets and falling branches, I was perhaps the only one fortunate enough to be
acting under orders.

Colonel Hovey was in the rear with the main army, but fortunately was mounted and on his way to join us when he heard the sound of battle and rode like the wind to our assistance. He met our retreating forces, about five hundred in all, and instantly attempted with great success to halt the troops at a good point for resistance. I shall never forget his courageous and desperate attempts to rally the troops. I was very near to his person when some rebel buckshot passed through his clothing and cut the skin of the upper part of his breast. The pain was intense as the first sensation was like being shot thru the lungs. He turned pale and staggered, and just as I was almost near enuf for assistance, I saw him tear open the clothing and feel of his wound. In an instant his countenance brightened as he drew forth his hand containing two or three
buckshot which had merely penetrated the skin. He said immediately, ” It is nothing but a flesh wound and some buckshot. I am not hurt,” and immediately proceeded more vigorously than before to arrange the disorganized soldiers for desperatedefense. The rally was successful, other troops arrived, the force of Texans was soon driven back and we were grandly
victorious.

His descriptions offers some detail that other reports did not provide, though he essentially, as has been the case, follows only the exploits of the 33rd Illinois Regiment at the expense of the 11th. Now, this, of course, is not unusual.

Christopher Wehner is a Civil War historian with his M.A. in United States history emphasis the American Civil War. He is a published author with two books, numerous journal and digital media media publications to his credit. To contact chris, cwehner -at- soldierstudies .org
View all posts by Chris →
This entry was posted in 11th Wisconsin History, Battle Bayou Cache. Bookmark the permalink.

1 Response to Battle at Bayou Cache