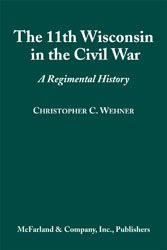 About the Book
This volume details the Civil War experiences of the 11th Wisconsin Volunteers as they traveled more than 9000 miles in the service of their country. The book looks at the attitude prevalent in Wisconsin at the start of the war and discusses the background of the men who comprised the regiment, 72 percent of whom were farmers. Compiled primarily from the letters and diaries of the men who served in the 11th Wisconsin, the work focuses on the firsthand day-to-day experiences of the common soldier, including rations (or lack thereof), clothing, disease, and, at times, the simple act of waiting. The 11th Wisconsin lost more men to disease than to battle, so their story presents an accurate picture not only of the heroic but also the sometimes humdrum yet perilous existence of the soldier. Appendices provide a list of occupations practiced by the men, dates of muster into service for the regiment’s companies and a copy of a sermon delivered by George Wells after Lee’s surrender in 1865.

About the Author
Christopher C. Wehner is a history teacher in Colorado.

“the powerful story of a regiment from the Wisconsin frontier that saw hard service in the Western Theater. Christopher Wehner has written a deeply researched Civil War narrative”–Lance J. Herdegen, author of The Men Stood Like Iron: How the Iron Brigade Won Its Name

“a first-rate account of a Union regiment that fought in some of the toughest campaigns of the Civil War in the West. Well researched and well written. Highly recommended”–William Shea, co-author of Pea Ridge and Vicksburg Is the Key.

http://www.soldierstudies.org
Christopher Wehner is a Civil War historian with his M.A. in United States history emphasis the American Civil War. He is a published author with two books, numerous journal and digital media media publications to his credit. To contact chris, cwehner -at- soldierstudies .org

8 thoughts on “Book: The 11th Wisconsin in the Civil War A Regimental History”

The 11th Wisconsin in the Civil War A Regimental History - PAPER BACK EDITION!

Sat Sep 5 , 2020
After 12 years since the original hardcover publication McFarland has decided to release a paperback edition as it as sold well. This is very exciting. This volume details the Civil War experiences of the 11th Wisconsin Volunteers as they traveled more than 9000 miles in the service of their country. […]

The 11th Wisconsin in the Civil War A Regimental History – PAPER BACK EDITION!

Book: The 11th Wisconsin in the Civil War A Regimental History

Site Updated and Returned to Normal

Daily Returns of the 11th Wisconsin